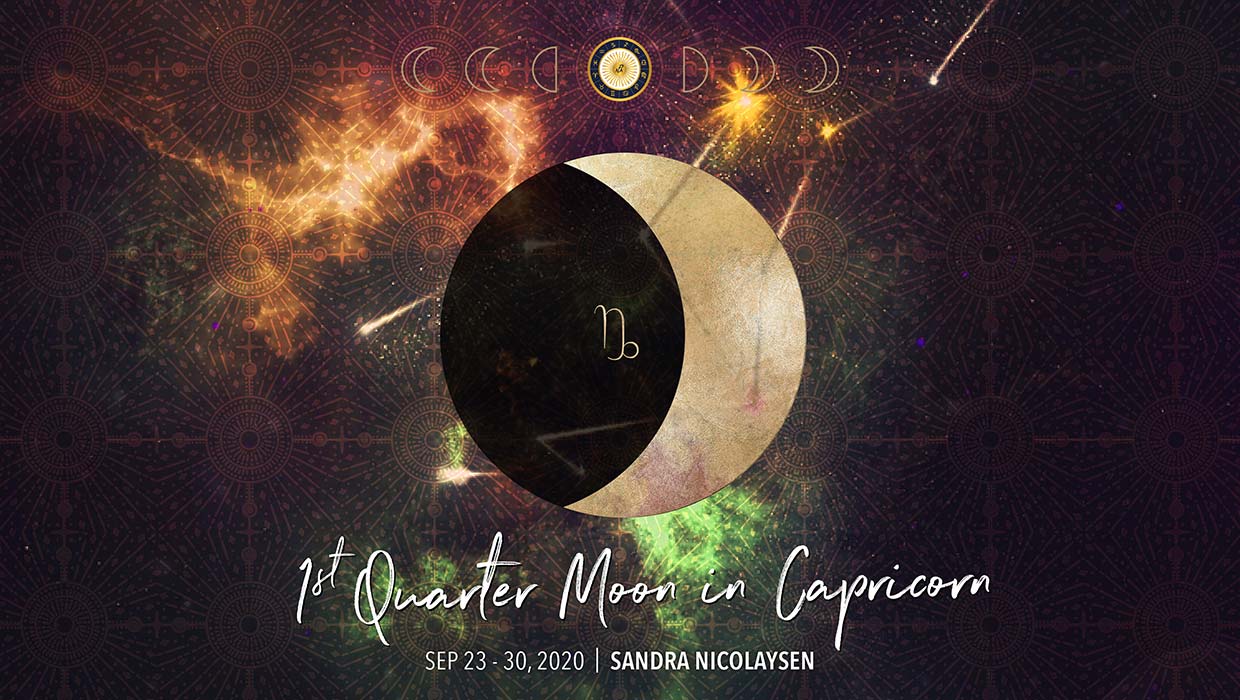 Here’s the lunar forecast for the week ahead. The Lunar Planner is one of many membership benefits for the New Paradigm Community. We’re making it public this month, as we are reshaping, enjoy!

The Libra season’s arrival on September 22 coincides with the Autumn Equinox, which means that the amount of light and dark are equal, the symbolic scales of Libra mirror this balance motif.

In general, Libra is about pleasure, beauty, relationships, and exchanging pleasantries, although this Libra season has a more harsh tone to contend with – due to a few intense planetary transits. Thanks to Mars Retrograde making a relentless opposition to those three slow-moving planets, the Capricorn Stellium, Jupiter, Pluto, and Capricorn, and an upcoming Mercury entering the intensity of the Scorpio waters. If that wasn’t enough, on October 14, Mercury goes into its Retrograde period. This is all happening simultaneously, which means that we have more than the usual amount of issues to rethink, rework, and rebalance.

But today, the Moon at 25° Sagittarius enters the First Quarter Phase, which in Astrology is when the Moon forms a 90° Square between the point of the New Moon, which happened last Thursday, September 17, at 25° Virgo. Virgo and Saggitarius are part of the Mutable Cross, and you know that the Quarter Phase of the Moon reflects one of the Quadrants of the Grand Cross, which is a fraction within the 360° circle of the Moon cycle. Note that the Moon’s Quarter Phase may happen within a Cardinal Cross, a Fixed Cross, and a Mutable Cross.

The energy of the First Quarter Moon is when we meet challenges and opportunities to remove blocks that impede our New Moon intentions. It allows us to move forward.

Intentionally aiming to achieve a specific goal. The next Moon Phase is the Full Moon, when you will probably feel a lot more empowered.

On Thursday, the Moon moves into Capricorn. The Capricorn Moon is about working to solidify your long-term goals and vision, seizing the day to get a lot accomplished, and getting the job done on a highly productive note. Save your emotional nature for another day. Your Thursday is about focus, determination, and efficiency. You will be surprised how much you will be able to get done as the Moon trines Uranus at 10˚ Taurus, which is the most positive aspect she makes today. Earth signs are all about being grounded and productive. The Capricorn Moon will also Square Quiron at 7˚ Aries, asking you to pay attention to your physical body, your sleep, your rhythm.

As the Moon transits along the late Capricorn degrees, she will first conjunct Jupiter at 17°, which could maximize the emotional impact of any serious subject that has gone unresolved. You better be prepared to dive deeper as she conjuncts Pluto at 22° Capricorn and avoid confrontations with women or family members. Keep your cool no matter what! Hey, Pluto is no ordinary player! And then, last but not least, she meets Saturn at 25° Capricorn, which will require that you ground yourself and prepare yourself to deal with any challenge that may cross your way. The message here is: reduce any unnecessary drama! Even if these transits only last a few hours, they can be very consequential, as anything related to a stellium in Capricorn is! Proceed with caution.

By late evening, the Moon prepares to leave Capricorn. As the Capricorn Stellium blockages are slowly surmounted, you are now aiming to reach new heights as the Moon grows in light and gives you more power. She steadily grows towards becoming a Full Moon. Around midnight, she moves into Aquarius, and she keeps pushing your inner strength towards expansion and fruition. It’s a steep rike, not a flat walk.

For the next couple of days, you will again see the Moon making a Square to Uranus Retrograde at 10° Taurus. Throughout the long transit of Uranus in Taurus, we will see the Moon making a Square to Uranus twice a month, when she transits Leo and Aquarius. When the Moon in Aquarius Squares Uranus, she arouses an independent and rebellious spirit in just about everyone. You are inclined to do precisely the opposite of what someone expects of you. You are impatient with restraints, duties, and responsibilities.

You have an intense craving for excitement under this influence of the Moon in Aquarius, especially in the relationship front since the Moon is making a Trine to the Sun in charming Libra. You may act in ways that differ from when you are in a more sober mood. This transit is about freedom of expression and audacity in your personal behavior and in relationships.

The problem with this rebellious drive of the Moon in Aquarius is that it is happening on the same day that Venus at 22° Leo is in an exact Quincunx to Pluto at 22° Capricorn. So if you are attempting to play too loose on the relationship front, you might face rejection. I highlight that I mean any kind of relationship! I suggest that you measure your acts’ consequences and take calculated risks according to the level of responsibility you find yourself standing at during these super intense times. Hey, remember that the next Quincunx that Venus will make in the following days is with Saturn at 25° Capricorn.

The Moon is still transiting Aquarius throughout the day, and she ends up making an interesting opposition to Venus in Leo. This is such a liberating aspect, especially if you are a woman. Imagine how eager Venus is to meet that freedom energy from the Aquarius Moon while being exposed to the Quincunx to Pluto and preparing to have a dire encounter with Saturn in Capricorn, next Tuesday, September 29.

When the Moon makes an opposition to Venus in Leo, you will tend to overindulge yourself with foods, drinks, sex, pleasures in general. You may also expect to get everything you want from others without making any effort yourself. This transit’s principal effect between the Moon and Venus is a desire for strong emotional contact and connection with others. The intensity of feelings and the interchange with another person is vital under this influence. Since the Moon is in Aquarius, this need for emotional connection can be extended to a group of friends with whom you feel strongly stimulated. There is a tendency towards extravagance, which is closely linked with the self-indulgence that I mentioned above. Remember that Venus in Leo just came out of a Square to Uranus in Taurus, and she is still willing to keep on unleashing her self expression very vividly. Keep reading! Intensity is on the rise as Mercury prepares to move into Scorpio at the darkest hours tonight!

You wake up Monday morning with Mercury in Scorpio as your alarm clock! Wake up, dearest Sun in Libra! Get up, Venus in Leo! The Party is Over! Let’s get down to some serious business around here! When you thought that the Libra Season would be a peaceful, pleasant one, Mercury in Scorpio heralds his upcoming Retrograde period, starting next October 14 at 11° 40′ Scorpio, and it stations direct on November 3 at 25° 54′ Libra.

But wait! There is more intensity on your Monday! Mars at 25° Aries is about to provoke Saturn sitting in his Capricorn throne! Well, yeah, Mars is sitting in his Aries throne too! Pretty intense times! I can’t warn you enough about the dangerous hidden herein! Write down on your calendar: Beware of the Tyrants, of any kind! Be-Aware!

If you have been reading about Astrology, you already know that these planetary transits overlap each other. Excellent transits may be challenged by hash ones. The current times are NOT ordinary times, and we can not take anything for granted. We need to exercise clarity and diligence at all times. The world scene is reflecting the tension that the planets are orchestrating from above. That is why we write these Lunar Planners, so that you may find your North, and thrive, and protect yourself amid the Chaos.

The Moon moves into Pisces’ warm turquoise waters during the late evening hours, forming a beautiful Trine to Mercury in Scorpio. The Moon here tends to smooth out the entrance of Mercury in Scorpio. She is a vessel for his intensity. She is comforting Mercury, telling him that all is well, just Trust! Pisces has a lot to do with Trust. It’s about trusting that prayers will have an effect, miracles will happen, and peace will guide the planet, as we dream of the dawning of the Age of Aquarius.

The Moon will be in Pisces until Thursday, October 1. While the Moon is still transiting Pisces and Conjuncts Neptune, it is time for you to really engage in praying, yoga, mantra singing, meditation, breathwork, all kinds of experiences that will allow you to enjoy some real chill out time.

Today is also the day when Venus at 25° Leo, forms a Quincunx with Saturn at 25° Capricorn and also a powerful Trine to Mars at 25° Aries. Mars and Venus are the two most ardent lovers of the Zodiac. They will take risks to be together, but this time around, Saturn is there looking at them trying to spoils the fun!

The Moon in Pisces is a moment when the material world receives nurturing energy that may bring some mindfulness to the battled hearts of us all. And we are now heading to the most energetic Full Moon of the Year, the Full Moon in Aries, where the brightness of the Full Moon will meet the boldest Ram, and its ruler Mars, the Fierce Warrior of the Zodiac. That’s my theme for the next Moon Phase: The Full Moon in Aries!