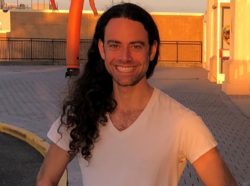 What occurs to me right now is to speak about something very unique that Jeffrey Wolf Green once taught. In fact, as far as I know his teaching on this was a single sentence and I feel this sentence can be expounded upon to great depth although, of course, it’s really simple. He once said, or wrote:

There’s an obviousness to that statement. If your hands are full you can’t put anything else in it. If there’s space then you can receive. Do you recall what is one of the main tendencies with Jupiter? Stuffing in too much! Opportunism, overdoing it and not knowing when to stop.

So this teaching in a way is an antidote to all of that. There’s not much more to say as it’s pretty self evident, so I’d like to offer a couple stories and bring in some astrology.

Letting go of my books

When I first got involved in astrology I ended up amassing a fairly large book collection. I don’t think I actually read most of them, but they were there and for sure were very influential in my life for a short time.

It was 2005 and Jupiter was transiting over my Saturn in Scorpio in the 2nd house. At that I’m pretty sure I got rid of all my books. If not all, then certainly nearly all of them. I sort of gave up on astrology. It was an interesting time. I recall two moments, where I was and what I was doing when I had the disiulsioning realization that I will never know what astrology really means. I realized that its vastness is beyond what I could contain in my mind. I actually still feel that way. The difference between me then and me now is now I don’t mind. Then, I was actually really sad about it. For a short period in my life I felt like a child who just found out Santa Clause isn’t real. I knew there was so much more out there and I didn’t believe anyone really knew it. And so all those books I had just made me feel worse. People talking about things they knew but also unaware of how much they don’t know. I didn’t want to entertain anything that stopped somewhere. So I decided to not entertain anything.

My friend once said something I quote often. It’s one of my favorite teachings, “Less is more. Nothing is everything.” So Jupiter is transiting my Saturn in Scorpio in the 2nd house and I get rid of my books. Scorpio 2nd house: stripping away to what is of essence. I actually felt my books to be a heavy distraction from my own inner being. It’s something I knew I needed to do. Mind you I have the south node in Sagittarius in the 3rd house and lots of aspects to Mercury and Jupiter in Sagittarius, so getting rid of spiritual books is sort of an event in my life! It was a very bold and defining action for me.

I should qualify that up until that point I was probably studying astrology with never ending enthusiasm for about 2 years. I was kind of dabbling in a little bit of everything but I was constantly thinking about it, looking at charts, googling topics, tribe.net (remember that place?), took a course with my first mentor Antero Alli, guessing everyone’s signs … but I was now entering a new phase.

It was just that time that I got rid of all my books that I met with my new friend, Kai. Kai asked me what my ascendant was. I recall responding in a somewhat pessimistic way (a very Jupiter thing to do) and said “eh, do any of us really know what that means? I feel like it’s real but I don’t like to talk about it because it’s too abstract and deeper than our understanding.”

He said he had a couple books he wanted to show me. The first book was, “Sacred Marriage Astrology”* by Adam Gainsburg. I checked out the book and I also read some of Adam’s articles on his website. I was instantly drawn in. I completely resonated with every word he said. There was a consciousness and understanding of spirituality and awakening that was 100% intuitive to me. Adam was speaking the language I didn’t even know I was looking for.

Then Kai showed me the next book “Pluto the Evolutionary Journey of the Soul’ by Jeffrey Wolf Green. The moment I read the intro to that book I felt an intense reaction. I was actually a bit jealous and angry. I felt I should have written those words.

And so my destiny unfolded from there. I became a student of Adam, who I quickly learned studied Jeff Green’s teachings, and a few years later I dived completely into Jeff Green’s Evolutionary Astrology.

So what happened here? I let go and then I received. The flow of that experience was perfect. My letting go was sincere: something in me knew that shedding was necessary. Otherwise I would have felt the Jupiter overload (Sag in the 3rd house: too many books equaling confusion and lack of clear insight). My interest in Adam’s and Jeff’s teachings was also sincere. Everything occurred naturally, spontaneously.

We can look upon the famous Jupiter “opportunities” not as something we need to go out and seek. Our alignment with them is quite a natural process. All we need to do is be sincere in our own life, reduce what is in excess, let go of what is taking up too much space. During any strong Jupiter transit in our lives it’s very common to undergo a certain stripping away.

The “letting go to receive” is not just a conscious act. Something life will literally take something from us. I’ve seen it several times that there is a death of a loved one, or something that has otherwise been regarded as important in one’s life suddenly goes away. What that does is it places a focused magnification on the area of life that experienced the loss. “Nature Abhors a Vaccum” and so something always comes in. The reduction of something from someone’s life so often has the consequence of creating space for something greater that serves for the soul’s ongoing growth in life. This is the generosity of the tao: on it’s own life shuffles and re-organizes to foster harmony and well-being.

I once wrote a poem and for the life of me I can’t find it. So I’ll roughly quote myself. The poem was inspired by the teachings of Lao Tzu where he said, “to straighten something, let it be bent.” To which I add,

To fill something, let it be empty.

To be found, let yourself be lost.

For only that which is empty can be filled.

Only that which is lost can be found.

It gets more poetic, but that’s the basic point.

The books come back

So I got rid of my books in 2005 and since then I’ve only owned a handful of astrology books, most of which have moved on. It seems that I’ve always had what I’ve needed and have never felt the draw to acquire more books for the past 14 years of my life.

Fast forward 2019, I’m currently living in my own unit at the same address as my parenting partner Michelle whom I’m having a child with at the end of this year. She happens to be an astrologer! And guess what? She has lots and lots of astrology books. What makes this a Jupiter story is that her Jupiter is conjunct my Saturn.

So to clarify the punch line: when transiting Jupiter moved over my Saturn I let go of my books. When I move onto the same property with Michelle, who has her Jupiter on my Saturn, (likely) all those books (and for sure) more return to my world! Wise are the ways of the tao.