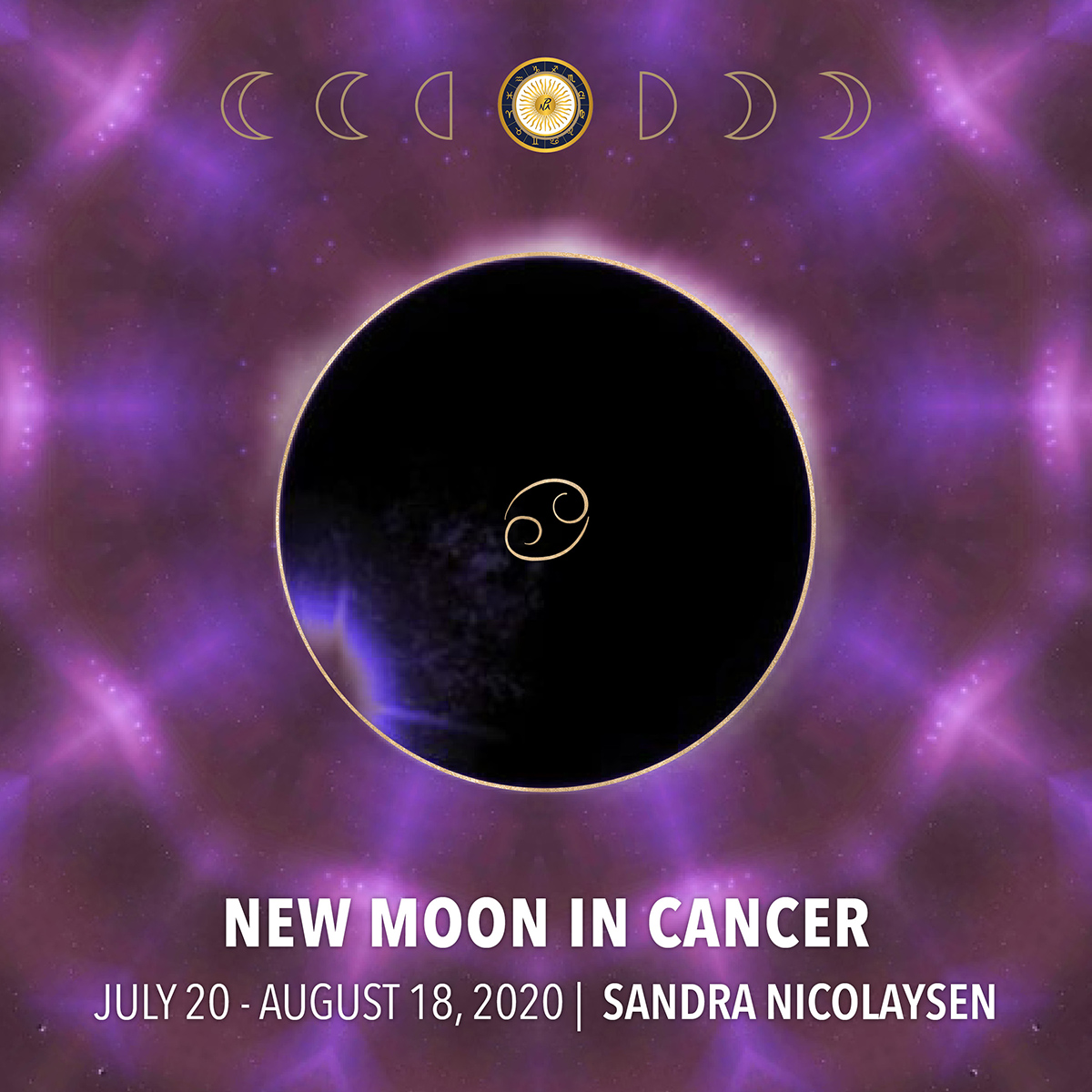 When the Sun Conjuncts the Moon it’s called a New Moon, or the Dark of the Moon Cycle. It means that they – Sun & Moon – are standing together in alignment, generally in the same sign. This leads to a merging of the male and female archetypes within one’s heart, mind, body and Spirit.

New Moons are seeding cycles, one that truly affects us on a deeper level. As soft and quiet as the New Moon is during this period – remember the Moon has no light of its own – she is still very active reflecting the light of our inner world, instead of acting as a giant reflector of the outwardly Sun’s light as it happens during the Waxing Crescent, mostly when it approaches the First Quarter, and Full Moon phase. During this critical Moon Cycle, Sun and Moon bow to each other in a quiet and silent dance in the sky.

Many astrologers have written about how the Sun & Moon combination affects relationships. When the Sun and the Moon merge during the New Moon cycle, both parties must be very expressive of emotions, especially when the alignment happens in the sign of Cancer as is happening right now.

If you have been studying Astrology long enough, you already know that the Moon’s domain is about the world inside of you. It’s mostly a night time, feminine experience. It’s during the New Moon phase that the Yang energy of the Sun yields to the Yin energy of the Moon, in full devotion to her / our sensitive feminine essence.

This current New Moon in Cancer, the second one this year in the sign of Cancer, will have an effect until the next New Moon, which happens in the sign of Leo on August 19th. The Cancer New Moon is in a Cardinal Water manifestation, and it will activate full force the expression of the water element. It’s an emotional Moon. You may expect to be moody during this lunation, or maybe just more reflexive, sensitive, caring, and nurturing. But, we must also take into consideration that the moment of this New Moon at 28 degrees of Cancer is also an encounter by opposition to a Retrograde Saturn at 28 Degrees of Capricorn.

As this encounter occurs, we can expect a certain amount of sadness at certain realities, or even a slight depression may be present during this New Moon. You may be experiencing some deep emotional blockage that can not be expressed because someone is just not holding the space for you to voice your feelings or emotional frustration. You may even experience some hard emotional discontentment that exposes your most sensitive nature. Saturn is a tough teacher! But if this happens to you, it’s because you are being called on to grow up and become totally responsive for yourself, and mostly for the choices you make.

As the Cancer New Moon also opposes Pluto and Jupiter in Capricorn, you may be challenged by a new toughness that goads you to get down to brass tacks. It may be that you can no longer be dependent on certain key female figures. If you refuse to act maturely (Saturn, Pluto) they may withdraw their support towards you. Under this same tone, you may be called to assume some responsibility for them, if they happen to be your close relative and are undergoing an aging process, or going through a hard time. Then it’s you being called to provide and support them, out of a sense of responsibility for the other. The New Moon affects our understanding of one another’s feelings and emotional needs.

As we look towards the opposition that happens between the New Moon in Cancer and its opposition to that Capricorn Stellium formed by Retrograde Jupiter at 21 degrees, Pluto at 23 degrees and Saturn at 28 degrees, the energy here can also represent you need to establish a permanent home or family situation is often a drive to be expected at this time. You may even want to settle down by getting married and choosing to finally commit to someone with the ultimate intention to form a family and become a parent. Because of the New Moon in Cancer in opposition to Jupiter, you may be ready to buy property if funds are available.

When the New Moon opposes Pluto – remember this New Moon in Cancer is making an opposition to Jupiter, Pluto and Saturn in this order, all in Retrograde motion – you can expect major life-transforming events and processes to take place, such as birth, the loss of a key female figure that has been in your life for quite some time, the revelation of family secrets, a major change in your living situation, or the entry into your life of a powerful and healing woman that may support you through a deep transformation long needed.

Since the New Moon has a lot to do with New Beginnings, but it is also a Closing Cycle, like the Alpha and the Omega, some deep-seated conflicts from the past and long-suppressed emotions may come to the surface to be healed, especially mourning that was never fully completed.

In synthesis, this New Moon in Cancer can be an intense though powerful lunation, bringing to the fore a catharsis in which painful old patterns can be understood and healed. This is an exceptionally effective Lunation Cycle for you to start therapy or work with a healer, since the last New Moon Lunar Eclipse happened at Zero degree of Cancer, activating that powerful solstice point in the heavens.

This Lunation Cycle can be opening a portal that acts as a dramatic rite of passage – sometimes rather painfully in case you are too resistant to change. Yet, you are reborn as a whole, powerfully transformed new person.

I am Sandra Nicolaysen, and I have been part of the New Paradigm Astrology since 2014, and started studying Astrology in 1982. I have a Masters degree in Clinical Psychology with a specialization in Psychoanalysis. Sigmund Freud, Carl Jung, and Jacques Lacan have greatly inspired my clinical practice. My work is a synthesis of my knowledge and skills.

Wishing you so much Love!

In astrology the Sun is like the hour hand, the Moon the minute hand and the Ascendant the second hand. Let’s all listen to the natural cycles of change during these times by tuning into our great Mother Moon!

Every month, NPA offers you this overview of the month ahead starting with the New Moon.
Stay tuned for weekly Astro-insights!