🌟🌟🌟 In addition to the weekly and monthly overview that we offer you with the Lunar Planner every week, there is a daily breakdown of the energies included with your New Paradigm School of Astrology membership! We’re giving it to you here today for free so that you can see its value. This is just one of the many benefits you receive when joining the school. If you’re into astrology, the New Paradigm School of Astrology is the way to go. Check it out HERE! 🌟🌟🌟

The Sabian Symbol for this month’s new Moon brings into strong contrast the major themes we’ll be seeing, hearing, and dealing with through this cycle. It speaks of “order” and the difference between Cosmic Order and the socio-political order created here on earth by governments and individuals who then impose them upon the populace. The transit of Saturn, the planet of order, through Aquarius, being recently visited by Venus and now Mars reflects the restructuring of social order according to new visions and ideas of something “advanced, better, and more enlightened.” Transiting Jupiter conjunct Neptune in the sign of Pisces speaks to us of a higher, more subtle, cosmic order that we must tune in quietly and humbly to hear and see, lest we are led astray by innocent, misguided, “blind faith.”

Keynote:  An idealistic reliance upon a mental image of universal order.


“The wild goose is the mystical bird, hamsa, of Hindu tradition. The Hindu hamsa was the symbol of man’s transcendent soul.
What previous interpretations of this Sabian symbol have failed to grasp is that the flight of geese presents not only a remarkably geometrical V-shape moving through the sky but also that this flight is seasonal and therefore attuned to planetary rhythms. Thus, it symbolizes cosmic order, in contrast with the social-political order within a nation, which is represented by its ruler.

It is order made visual on the background of the clear sky. It is a” celestial” type of order even though it is earth-born birds that reveal it by their ability to keep their flight structured. The symbol, therefore, refers to the Soul-consciousness as visualized by the heaven-oriented mind. Yet this soul-consciousness can be called transcendent because it has not yet become “incarnated.”

Because this is a second stage… we have to consider what it pictures in contrast to the preceding symbol. A basic dualism of consciousness is thus suggested. We see arising a potential conflict between cosmic and social principles of order. The principle of COSMIC ORDER polarizes the all-too-human reliance on the social concept of law and order.” 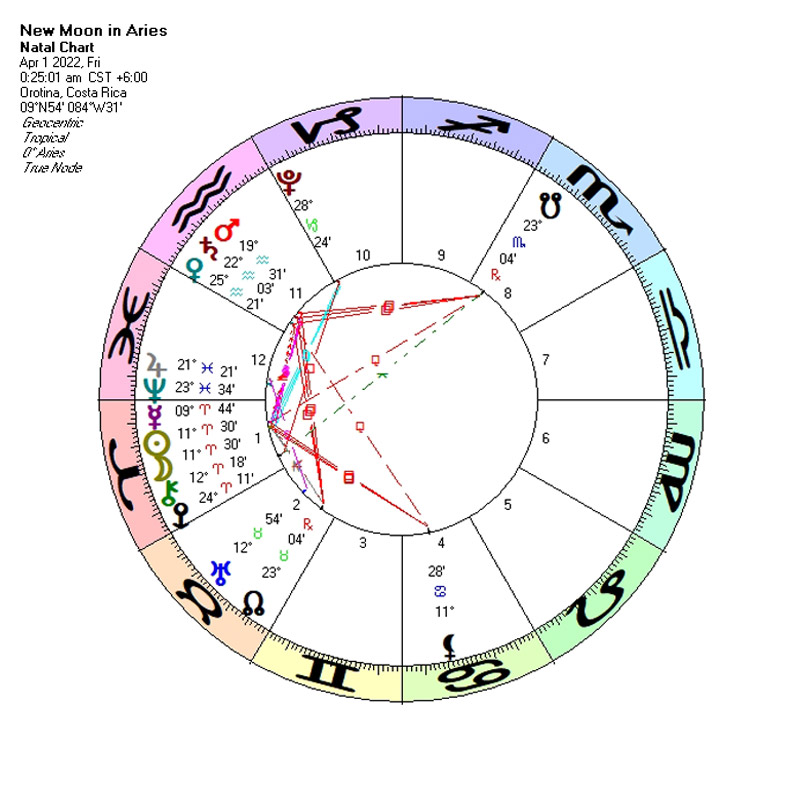 We have had a heavy dose of Saturn, the ruler of Capricorn and co-ruler of Aquarius since he entered Capricorn in 2017 and was joined by Jupiter at 0° Aquarius in December of 2020.

He is the planet representing third-dimensional, materialistic time and space that imposes boundaries, limitations, and separations while demanding self-restraint as we are told to conform and obey the socio-political orders created by our government rulers for the good of society. This month, he is joined by Mars and comes in to square the north node of the Moon in Taurus that is calling each of us to become more self-sufficient, abundant, fed, full, healthy, and strong in our own right. This is but one example of earthly order (war, inflation, supply chain issues, climate and food disasters, etc.) coming into polarization with human beings’ cosmically ordained natural rights to live in peace, abundance, and prosperity.

This new Moon is conjunct both Mercury and Chiron, the “wounded healer,” in the sign of Aries, indicating that now is the time to actively assert ourselves and heal the wounded masculine within each of us. By honoring our right to exist, assert ourselves, protect ourselves, stand for and by ourselves, and speak and act on our desires, wants, and needs.

It is no accident that Jupiter is also in alignment with Neptune in their own sign of Pisces while all these other constellations are forming. It mirrors the division occurring here on planet earth between earthly and cosmically oriented people. Between those who listen and follow the socio-political dictates spouted by political, scientific, medical, and corporate rulers and those who are tuning into the cosmic truths and natural laws that have existed before those others and will continue to exist long after nations and their rulers have risen and fallen. Between those tuned into MSM (mainstream media), the war drums being beaten, the fear being fed, and those tuning in to nature, the land, the crops, their bodies, and physical, emotional, mental, and spiritual health. Both will have ideas, imaginations, and some illusions that will carry them forward this month to their own new, different horizons.

Astrology is the study of cycles by and through which all evolution occurs (or does not occur). It tells us that the Sun is rising but doesn’t kick us out of bed.

It indicates the best time to sow and the best time to reap, but it is up to each of us as individuals, lovers, families, groups, and nations to pick ourselves up along with our tools and get about creating a life we love. Now it is telling us it is time to change, to revolt, confront, and stand firm for the cosmic orders and laws that supersede all others and are not being honored, respected, heard, followed, or implemented by those seeking control over Gaia, our home. It is time to think and act independently and break free from the bonds, limiting contracts, patterns, conditions, and relationships of the past (Saturn/Mars square the nodes) to develop our own self-reliance, capacities, talents, and unconditional self-love. Will we heed the call?

We’ve got to love ourselves before anyone can truly love us. This month we will have ample opportunities to see how we get in our own way, how our fear and self-rejection undermine our progress, and how our insecurities cause us to cling to unhealthy means of self-expression in our homes, jobs, relationships, and future life plans. The full Moon in Libra will illuminate the degree to which we are compromising and cooperating from a strong, centered, sense of self, or being dominated and bullied due to remaining in victim consciousness and fear resulting from a lack of confidence and inner strength born of knowing that we are One with the Source of all creation. May the Sun heal your wounded warrior within, and may you stand true and tall, speak your truth, and courageously seize each moment and squeeze the juice of ecstasy, the elixir of life, out of it, enjoy it, and pass it around.

La Luna enters Aries and blows by Mercury to close her last cycle and join with her light, the Sun, to birth a new one.

It’s an emotional day where you may feel irritated and impatient with others, especially it they are in the way of you getting what you want. It’s best to hold your tongue and think first before causing more trouble than it’s worth!

The Sun and Moon come into deep conversation with Chiron, the wisdom teacher today. The Moon waves a next sextile to Mars and Saturn over there in heady Aquarius.

This is a good day to take a deep look at yourself from a dispassionate point of view to objectively see your assets and your liabilities. You don’t have to judge what you see, but you can take note of how in alignment your wants and desires are with your long-term plan for soul growth.

It’s Mercury’s turn to talk to Chiron, and then he catches up to the Sun. Meanwhile, la Luna sextiles Venus and squares Pluto.

What a great day to take action and implement a health plan/regimen that you’re going to stick to from now on! What’s good for you is good for you and what’s bad is bad, and today you know the difference.

La Luna checks up on Uranus in Taurus.

This may not be a relaxing Sunday to sit around the pool or walk in the park. You’re probably already feeling the pressure and the stress (maybe even some anger) at “life these days.” So it might be better to find a good physical outlet for any pent-up emotions, like a boxing bag or pushing some weights around until you sweat.

Today we have the culmination of the last week or two as Mars finally comes into conjunction with Saturn, and they both square the Moon’s nodes to the degree! Meanwhile, back in Taurus, the Moon is definitely taking her north node to her side, squaring both Mars and Saturn (and Venus!) while busily sextiling Jupiter and Neptune and trining Pluto!

As you can imagine, it’s an emotional day! Not only that but you’ve got work to do! OMG! It would be best for you to have some work that you love doing and can put your whole heart and soul into. If not, you may blow up and tell someone to take this job and shove it!

Whew! Feeling good about having yesterday behind you, today is an excellent day to mellow out and imagine a brighter future. You may go so far as to pick up a paintbrush, colored pencils, or a guitar and soar to some higher realms leaving the blues behind.

This Gemini Moon aspects just about everything there is today! First, she sextiles Chiron, the Sun, and Mercury. Then she trines Saturn and Mars and squares Jupiter and Neptune!

If you can’t make up your mind today, it is no wonder! Best to do a little bit of this and a little bit of that and not try to bite off more than you can chew in a short time as you’ll probably get bored with anything too heavy. Lighten up, no matter what they say!

It would be nice if you could just stay home and spend some time with your favorite hobby. It might be a good day to think of one if you don’t have one! However, if you need to do some work or make decisions, today is a good day to do it as your emotions and mind are in harmony with each other.

⚡️ Join the New Paradigm School of Astrology to receive a weekly lunar planner like this one, including daily aspects, and many more benefits! We are a group of folks deeply interested in spreading awareness, healing, and harmony using the powerful medicine of star wisdom.
🦅 ENROLL HERE!