In order to understand the astrology of this new lunar cycle, it is helpful to look at the broader context within which it is occurring. Aries is the archetype of new beginnings, new impulses, new desires, independence, and initiation.

The Sun is traveling along with both Mercury and Venus by his side this month, and we can look at them a bit like the minute hand of a clock. The hour hand I would put on Saturn (Chronos), up in Aquarius, just about midway between Pluto and Jupiter. This hour hand has moved from Capricorn (established external authoritative institutions) last year into Aquarius for this year and next. Astrologically, this signifies a stepping out, back, and away from those old institutions (can also be beliefs) to liberate ourselves and envision new futuristic forms and relational structures.

Saturn in square to Uranus (Prometheus, the rebel light-bearer) symbolizes the resistance and resulting tension created by the old-established power brokers refusing to give way to the new, more enlightened, and less restrictive paradigm. 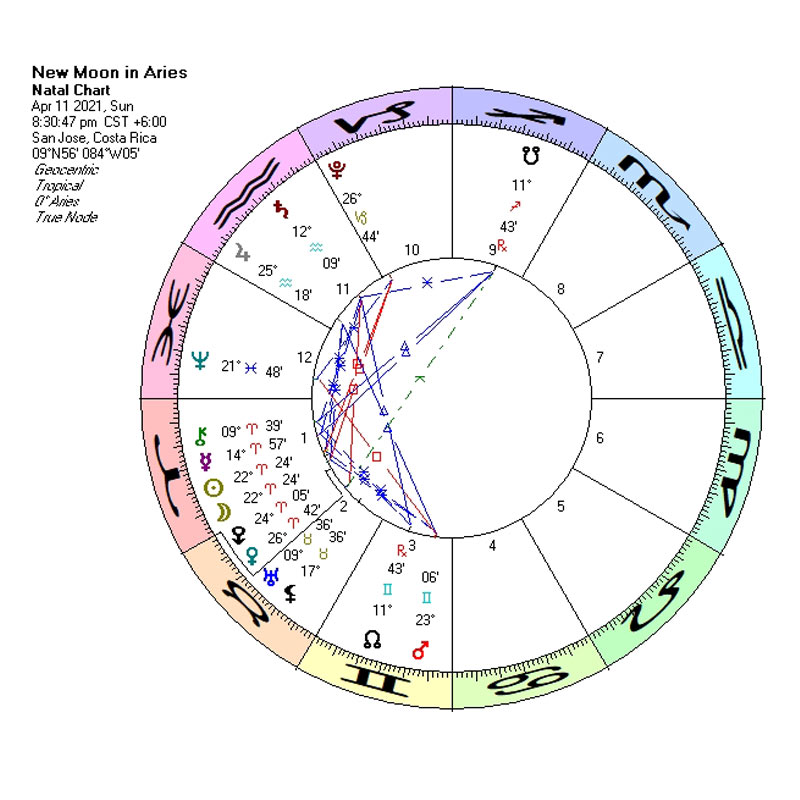 The polarizing tension between the liberal and conservative, the left and the right, poor and rich, the privileged and the underprivileged, is mounting. Shortly after this new Moon in Aries, the Sun, Mercury, and Venus (along with Lilith dancing in and out), our “minute hands” will be joining forces with Uranus in earthy, Taurus the Bull. The primary energy will be one of tremendous, pressure building up like steam in a pressure cooker needing release. Fortunately, later in the cycle, this “minute hand” will come to trine Pluto and sextile Neptune, indicating the possibility of new ideas, negotiations, inventions, and relationships emerging out of the tumult.

Aries and Taurus, the first two signs of the zodiac wheel, are where new evolutionary impulses are birthed and take root. This is an inward, personal process when it’s best to gather our nuts like squirrels, develop our capacities, and establish psychological and financial independence. This month, I encourage “radical self-love,” as the more we value, develop, and appreciate ourselves, the more abundance, love, and respect we will open ourselves to from the outer world. This period is better spent working, building, and focusing on our personal projects and worth rather than reaching out, asking for help, and seeking external acknowledgment or support. Like the cook in the kitchen, the general gathering his troops, or a seed about to sprout, this month is a time of inner preparation and self-nourishment, readying ourselves for personal/social expression, expansion, and transformation.

We can expect a rough terrain as the cosmos\Gaia helps shake things up, making the need for evolution more apparent to those less inclined to change. We will experience sudden, radical shifts in everything from currencies and financial markets to food, weather, volcanoes, and all things to do with our physical survival.

The last week of this month, as the full Moon in Scorpio squares Saturn and opposes the stellium of Sun, Uranus, Mercury, Venus, and Lilith, is sure to bring both our deepest needs and fears to the surface. The star wisdom tells us to clearly and firmly establish our values and stand firm in our truth. Possibly needing to confront, revolt, or in other ways liberate ourselves from the shackles of limited thinking, social/political/military suppression, and outdated, ineffective methods of dealing with our current problems, both personal and collective.

It is our challenge as initiates at this time to master our need to act, assert, and revolt with calm understanding and mature objectivity. As Mars enters watery Cancer, the tendency to react/respond from subjective feelings conditioned by past (often childhood) emotional trauma will increase. The highest expression of this energy is that of the shepherd tending the sheep or the mother bear protecting her cubs.

Rather than lashing out in acts of rebellion, anger, and frustration at supposed enemies, perpetrators of wrongdoing, or tyrants, we are being asked to rise above the fray of personal preferences and view our lives and the future from a broader long term perspective. From this elevated state of consciousness, we may discover new avenues and solutions to current problems rather than be broadsided by destructive, emotional storms.