As this new Moon in Gemini is a partial solar eclipse and tied into this year’s “eclipse season,” we will need to explore eclipses in more detail to fully understand the depth and power of this new Moon. An entire chapter can be written on eclipses, their meaning, cyclical nature, astronomy, and astrological significance.

I will “boil it down” to some keywords, thoughts, and observations, but be aware there is much more. I will do a live instructional Zoom meeting for NPA members to go entirely into the nature of ECLIPSES Sunday, June 13. 👉 Join me here! 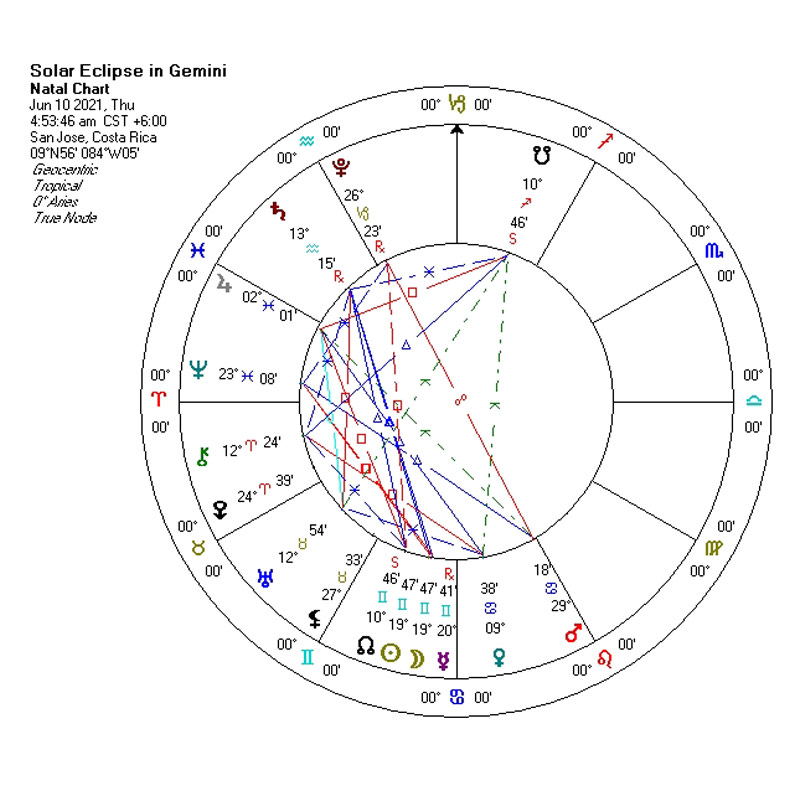 The Sun is the source of light and warmth without which life could not exist on our planet. All the planets and the Moon herself reflect its light, and it holds the center of the solar system around which all the planets revolve. As such, its astrological symbolism in the chart is that of the creative, purposeful, spiritual power of the Solar Self.

Due to their differing size and distance from earth, both the Sun and Moon appear nearly the same size when viewed from the earth’s surface and are referred to as “the luminaries.” The Moon reflects the light of the Sun and changes from utterly dark at the new Moon (especially during a Solar Eclipse) to completely light at her fullest. These changes are only seen from the surface of the earth. Therefore she symbolizes the changeable, earthly, human, subconscious emotions through which the solar purpose of the Sun is expressed through us in the material, 3D realm.

The orbital plane of the Moon is tilted 5° 8′ 40″ in relation to the ecliptic (the earth’s orbital plane around the Sun). These two planes intersect at two points. The point of intersection where the Moon in her orbit is transiting from the south to the north is called the North Node of the Moon, the Dragon’s Head, or Rahu and is associated with the future.

The point at which she transits from the north back down to the south is called the South Node of the Moon, the Dragon’s Tail, or Ketu and is associated with the past. In astrology, the northward crossing (north node) symbolizes a coming up from below and has a positive, creative, spiritual interpretation. In contrast, the southward intersection (south node) has a “moving away from Sprit toward earthly matter,” negative, personal interpretation.

As polarity is the universal law governing growth and evolution on the earth plane, we do not want to judge these movements, or nodes, as good/evil or right/wrong. Instead, we can view the monthly movement of the Moon as breathing or alternating from one pole to the other. As she approaches the north node, she receives new inspiring creative input from the Sun, which she then brings down into personal, human, material experience as she nears the south node. Then, after exhaling or emptying herself and freeing herself from the past at her south node, she again heads back up toward the north, inwardly processing the experience and preparing for more new input.

In addition to the Moon’s orbital motion around the earth, the nodes themselves orbit once around the earth approximately every 18.6 years. It is as if we receive new creative impulses guiding us toward our soul’s destiny at the ages of 19, 38, 57, and 76 when the nodes “return” to where they were when we were born. Besides the nodes returning to themselves, we can also deduce that they will return to the same degree of the zodiac every 19 years.

For instance, the current eclipse season we are experiencing now (south node lunar eclipse at 5° 26′ Sagittarius and north node solar eclipse at 19° 47′ Gemini) occurred back in May and June of 2002 with a lunar eclipse at 5°04′ Sag and a solar at 19° 54′ Gemini! You may find yourself dealing with some of the same karmic issues now that you were back then if you are old enough to remember.

Lastly, when it comes to eclipses, it is important to note that they will be more predominately felt when they are closely aspecting natal planets (especially the personal planets) or the angles (Ascendant, Descendant, MC, or IC). Otherwise, while they signify times of sudden, radical changes within the collective consciousness and the earth/weather, you may not experience radical, personal, life changes yourself (but will most probably know someone who is!).

In any case, the house position of the north and south Moon’s nodes (currently at 10° 46′ of the Gemini/Sagittarius axis and moving retrograde an average of 3 minutes of arc/day = transiting a sign every 1.5 years) will give you more information regarding your personal destiny.

Putting this Thursday’s new Moon, north node, solar eclipse into the bigger picture of this eclipse season and the cycles of eclipses, we see that we hit a “low,” inner, reflective, emotional point in the cycle at the lunar eclipse two weeks ago. Then, it was the Moon crossing from north to south, emptying herself, and bringing up deeply buried emotional patterns and conditioning to the surface for us to see, feel, and process. It is like we have been rising from the depths toward the light, and this journey, with all of its bumps and bruises, will lead to a clarity of purpose and “enlightenment” as she transits her own north node to join with the Sun himself!

What has been lurking beneath the surface will now be exposed to the light of consciousness so decisions and actions of a positive nature can mature and new consciousness gained.

Let us now place this in the context of the Sagittarius/Gemini axis, noting that the future, light-filled, creative impulses are coming through the north node in Gemini, and the worldly, earthbound, past, “ruts” are being brought up in Sagittarius. The symbolism, therefore, of not only this month-long eclipse season but the 1.5-year period of the nodes moving through this axis (from May 2020 – January 2022) is one of reviewing and realizing the nature and impact of our limited core beliefs (Sagittarius) that have formed our old sense of meaning and purpose in life, and releasing these in order to evolve.

Thus, the old purpose, direction, or point of our very existence has been challenged, and our task is/has been/will be to release what is no longer serving us while simultaneously bringing forward, building upon, or creating new meaning, direction, and purpose in our lives. Otherwise, we may suffer from fundamentalist, extremist, rigid, fanatical, extreme, and dangerous zealots (or become one).

The message of the north node in Gemini is to take our long-range, philosophical beliefs and bring them right down into the here and now. It is time for the thinker to become the writer, speaker, teacher, networker, and business person acting on their beliefs. It is time to take our Sagittarian, right brain, intuitive understanding and find the ways, means, and words that will impact our immediate surroundings, associates, and environment. Gemini calls us to change! These changes can occur anywhere from the most minor change of job or business to our very purpose and life direction (again, depending on the house and aspects to your birth chart).

As mentioned, the new Moon coming reflects the new impulses, instincts, ideas, and mental images of the future emerging from deep within our unconscious soul (some even from past lives). In addition, this eclipse is conjunct a powerful Mercury at home in his own sign of Gemini.

Finally, as the Moon waxes toward full, we have a plethora of other aspects she will make as she “descends” down to earth with her newfound Solar purpose. Venus charging through Cancer while Black Moon Lilith races out of Taurus to conjunct Mercury and the North Node are just a couple of these aspects.

☾
So Much Love,
Kaypacha

I will break down this week’s lunar cycle into weekly and daily aspects for members of the New Paradigm Astrology community. It is a group of folks deeply interested in using the wisdom of the stars to guide and illuminate their lives.

If you are not currently a member but would like to learn more about astrology and support Kaypacha’s work, CLICK HERE. Hopefully before Sunday so you can join my Zoom call on Eclipses! Otherwise, know that a weekly overview will be forthcoming at the first quarter square Moon, so stay tuned!