The Sabian Symbol: A man, having overcome his passions, teaches deep wisdom in terms of his experience.
Keynote: The constructive use to which difficult past experiences can be put as examples for those who are still striving to overcome their passions.

I believe this Sabian symbol speaks for itself and speaks to the truth of what the archetype of Aquarius can stand for.
This fixed air (or outer space as I refer to it) sign is the eleventh, or second to the last, sign of the zodiac.

Having gone through an evolutionary cycle that began with Aries breaking from the past, growing, and maturing to fullness, the cycle now begins to wane, giving more than receiving/building, and is now less attached to achieving, but instead rises above to look ahead toward an as yet unknown future. The Aquarian energies of this Moon cycle are greatly amplified, being accompanied as they are, by Mercury, Venus, Jupiter, and Saturn, all forming a powerful stellium. It heralds a month of eye-opening, awakening, perhaps shocking, awareness of the interconnectedness of all things energetically manifesting as “the domino effect.”

This month will be exhilarating for those of us who are excited by change, the smooth or abrupt transitional period from one steady-state to another. For those who seek comfort in the steady, known, and familiar, this will be an unsettling, perhaps anxiety-producing, and nerve-racking month. What we will see happening around and within us is a rapid chain of events, “as soon as this (market) changed, then that shifted. That shifting pushed this over the edge leading to that collapsing which then gave rise to a whole new (market)!”

Some will be better able to see and take advantage of the connections than others. Still, we will all feel the effects of great external forces moving us personally and collectively toward an unpredictable change.

These changes result from spiritual forces both within and without us stirring us to become more conscious so that together, we may co-create an enhanced earth experience. 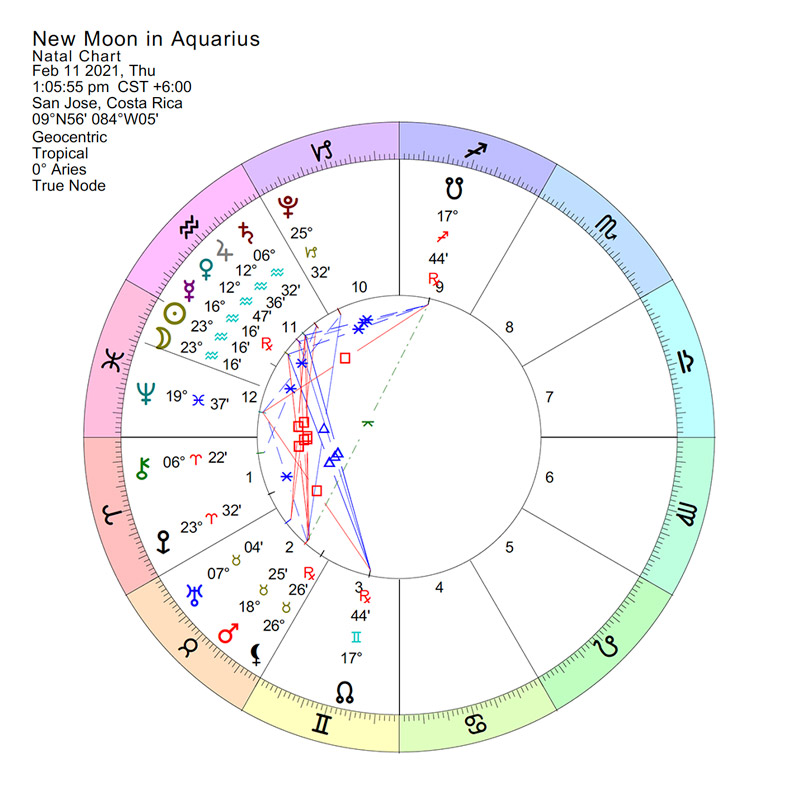 As the cycle progresses, Saturn will come into his first of three exact squares to Uranus. This aspect’s tension will be felt intensely throughout this month and to varying degrees through the remainder of the year. It is the eternal tug of war between the past and the future, the known and the unknown, the instinctive unconscious and the awakened, enlightened mind.

In some ways, Aquarius can be seen as the Lion Tamer in its opposition to Leo. The future awakening seeks to pull us up and out of our passionate personal adventures to serve our community and our planet’s greater needs. As the Sabian symbol describes, we may all feel some of our desires are not getting met or fulfilled. This frustration may descend into anger and rebellion or arise to creative invention.

Venus will be moving through a square to Mars in Taurus on her way to Pisces as she chases and almost catches up to the Sun. This, combined with Jupiter, continuing to shower down his Aquarian lightning bolts of genius, and Mercury stationing direct, will bring forth a plethora of new ideas, inventions, and technological advances, as well as some surprises in money markets (Venus) and environmental shakeups (Mars and Uranus still in Taurus).

All in all, this month’s overall energy is that of wrapping up old projects, relationships, and commitments to make space for and begin new ones. The image can be one of a hot air balloon taking flight. Envision yourself rising higher and higher and seeing farther and farther as the winds begin to take you away from the constraints of earth and carry you toward a far distant future.