We’ve got a new Moon at 23° Pisces 04″ this coming Saturday, March 13, 2021. The Sabian Symbol for this degree and its interpretation by Dane Rudhyar is:

ON A SMALL ISLAND SURROUNDED BY THE VAST EXPANSE OF THE SEA,
PEOPLE ARE SEEN LIVING IN CLOSE INTERACTION.

KEYNOTE: The need to consciously accept one’s own personal limitations in order to concentrate one’s energies and to live a centered and fulfilled life.

Every individualized person is a small island in the vast ocean of humankind. The ego fulfills a necessary function, as it sets boundaries and gives a specific character to the consciousness. Within these boundaries, a complex interplay linking and integrating the various aspects of the personal life can operate constructively. In time, these ego-boundaries can not only expand, but can become a zone of intense interchange between the inner and the outer, between the individual and the community, between humanity and the universe.

This fourth stage symbol tells us that any man or woman’s first duty is to be truly what he or she is as an individual. But this individual has a particular dharma, i.e., a place and function in a vaster whole. The island’s inhabitants get subsistence from the sea. In time, they learn to navigate this sea and interact with other islanders—and all eventually will come to realize their oneness within the whole Earth, which includes everything. An appropriate Keyword would be CENTRALIZATION. 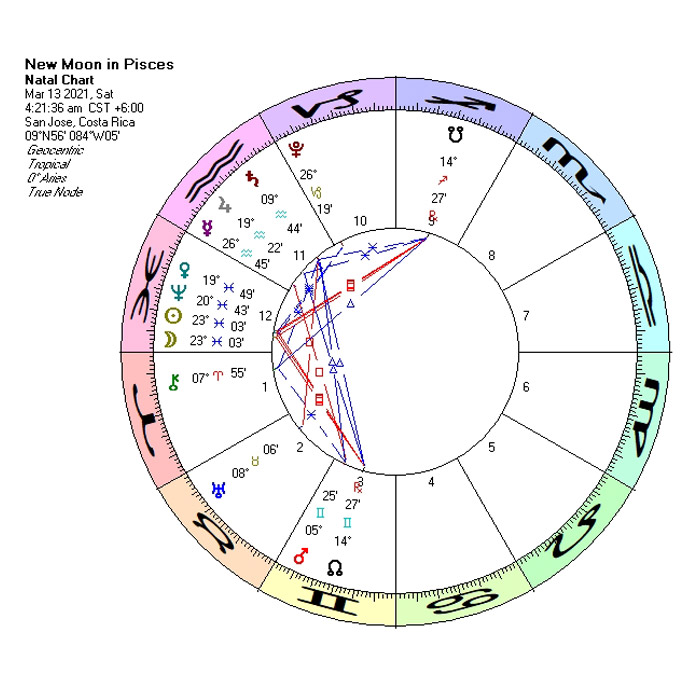 Those of you familiar with my work and the Sabian Symbols know that they depict a particular, unique energy present within each of the 360 degrees of the zodiac.

The New Moon occurring at this degree sets an “overtone” for this lunar cycle as one of working dynamically with the process of individualization. AND subsequently, the integration of us, as individuals, into both society, and beyond society, with “All That Is.” While this lunar cycle begins in Pisces, the archetype of divine unity with all that is, the Sun, Venus, and later Mercury, all move into Aries, the archetype of instinctual new desires welling up within and prompting each of us toward self-advancement.

Shortly after the New Moon and equinox, and within days of the Full Moon, we have a Sun-Venus conjunction at the 6th degree of Aries. This is a powerful culmination of the previous Venus 584-day cycle (1.6 years) and the beginning of a new one!  Venus has been slowly descending in the eastern morning sky (individualized expression) until she entered “the underworld,” February 14 where she will remain hidden until rising in the western evening sky (relationships with others) May 5. That powerful conjunction that is quickly followed with a tight union of the Sun and Venus with Chiron, the wounded healer (on the full Moon!), points to us all becoming more aware of, further integrating and balancing, our masculine/feminine, light/dark, expression/impression, doing/being, self/other, energies.

This new synodic cycle of Venus occurring in Aries sets the stage for the rising of powerful female forces and figures, standing up and speaking out on behalf of whatever has been undervalued, unappreciated, taken for granted, exploited, or written off. Venus has to do with what we value, what we love, and what/who we cherish. In Aries, she will remind us that it all starts with our SELF. Taking this into account, we can expect the next two weeks up to and including the Full Moon as an excellent time to begin new projects, relationships, change our values, let go of the past, and assert/insert ourselves into our new future.

We cannot devote or give away something that we have not grown and developed (unless we steal it)! As the Sabian symbol depicts, we need to define ourselves, strengthen ourselves, and know ourselves to hold healthy boundaries, know when to say yes and when to say no, what to stand for, and who and what to resist. Resistance and rebellion may take more center stage as Mars approaches and hangs out with the North Node of the Moon (strongest 3/20 – 3/31). As Mercury comes to square them the last week of the month, we may witness the raising of the temperature (so to speak), along with some voices and possibly fists.

Our heads (and the news) will be filled with new ideas, and we’re going to want to speak them, spread them, and perhaps butt up against whatever shows up as restrictive, confining, or limiting the expression of our will forces.

All in all, with some beautiful sextiles between planets in Aquarius, Aries, and Gemini, this lunar cycle presents itself as one of hustling and bustling and creating new stuff! It’s time to take the hopes and dreams of Pisces and slap ’em out there into action.

Perhaps the trick will be not to slap too hard! In all of our excitement, enthusiasm, and maybe impatience and anger, it will be helpful to remember that kindness goes a long way. Treating others with dignity and respect is the evolved Aquarian way.