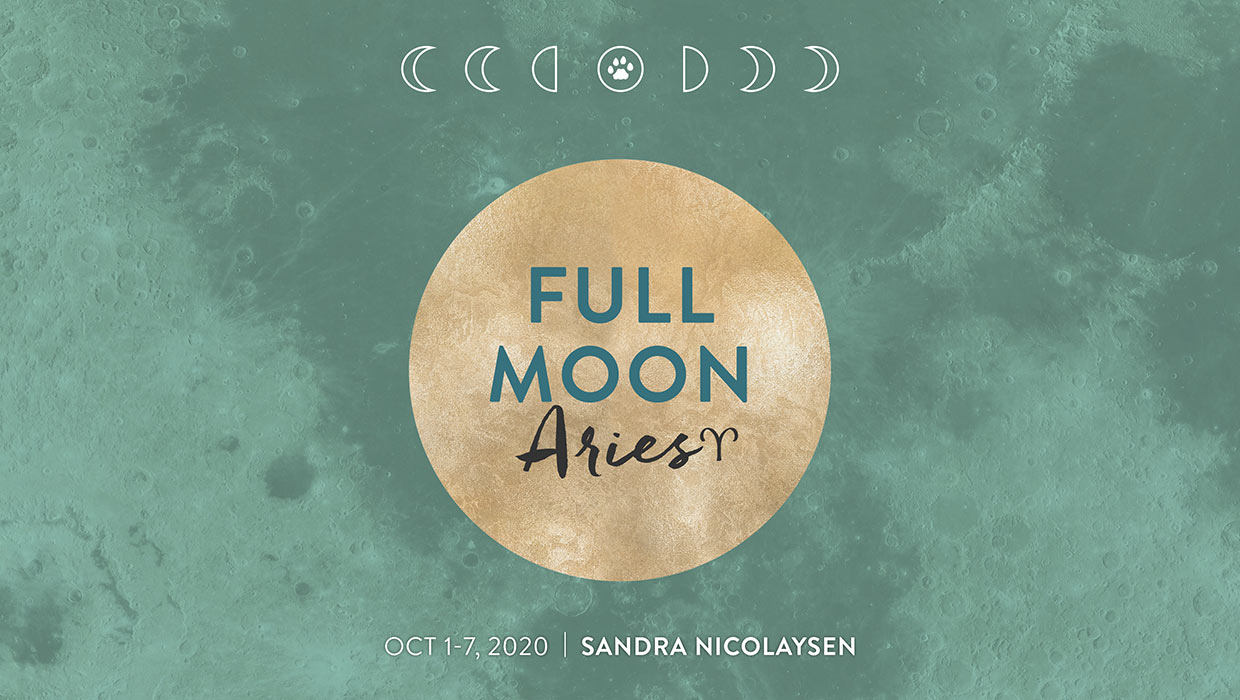 🌜 To continue getting our Weekly Lunar Forecasts, join our NPA Community today!🌛

Divine Energies of The Full Moon

The Moon is now 100% illuminated as seen from Earth, and it is on the opposite side of the Earth from the Sun. The Moon will be visible throughout the night sky, rising from sunset in the East and setting with the sunrise the next morning. The Full Moon is considered to be the most powerful of all lunar phases. She shines in her full splendor and reinvigorates its energy to all those willing to transform themselves.

My favorite ritual for any Full Moon phase is to charge my crystals under the Moon’s light because crystals will absorb the Full Moon’s energy. I suggest you wash them with running water the day before and let them dry. I like to listen to mantras while I wash them. Then, right after sunset, find a quiet spot where your crystals will rest for the whole Full Moon night. Set your intentions. Light a candle and incense. Say your prayers and expect miracles to happen. After all, this is an Aries Full Moon, which is very, very dynamic. Whatever vision you create with your crystals, under this Full Moon, tends to be maximized. But, take into consideration that you must be headed in an exciting direction. 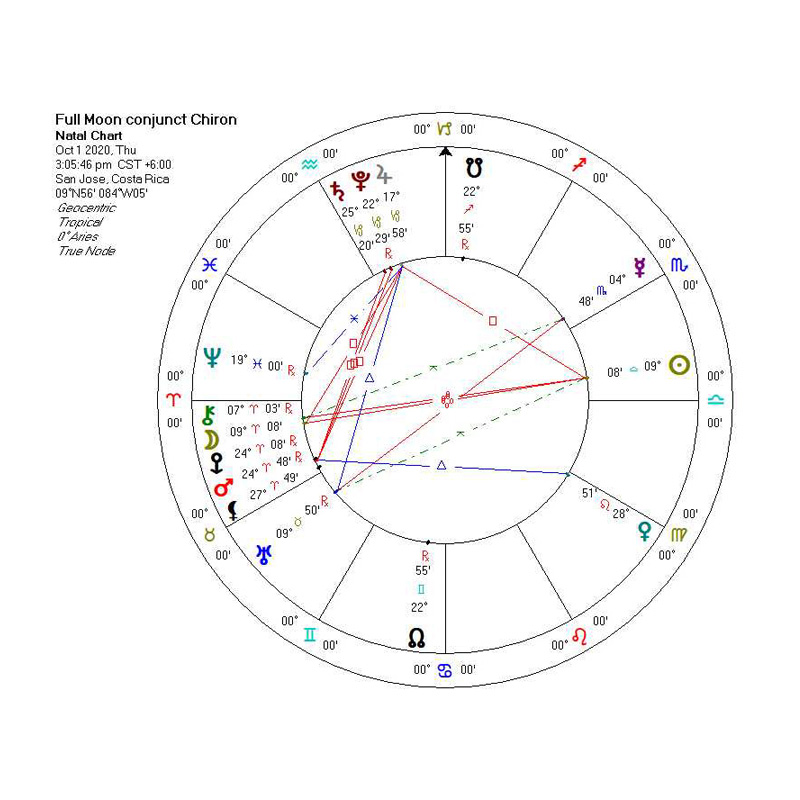 This Full Moon is even more potent as it’s happening at 9°8′ Aries, which is a bold, supercharged Fire sign, while the Sun is at 9°8′ Libra, an Air sign. Every single month the Moon transits the sign of Aries, but only once a year, the Moon is Full in Aries, exactly when the Moon receives full illumination from the soothing effects of the Sun in Libra.

On the one hand, you have the bold warrior, on the other, the peacemaker. This is an excellent opportunity to learn how to activate both notes in our personality. So, be careful with your impulsivity. Aries’s impulsive behavior may lead you to say and do things that you may regret later.

This is an interesting Full Moon because Mars at 9°8′ Aries is conjunct Chiron at 7°6′ Aries, which invites you to engage in a fast-paced recovery and healing process. Are you postponing to schedule a doctor’s appointment? As the Moon conjuncts Chiron in Aries, under the Full Moon influence, it’s time to heal! And you are likely to heal fast! Everything about Aries requires speed and action! If you have to undergo some type of surgery, this is the moment to be courageous and commit to doing it with no further delays.

Today, Mars Retrograde at 25° Aries is still in a tense Square to Saturn at 25° Capricorn – having just stationed direct for the second, and last time from their respective regency signs. Did you ever wonder why Mars is seen as a warrior? If you know how Mars acts and reacts, then you will be prepared to witness a lot of violent actions, harsh words, wars of all kinds, personal confrontations, political, private, and public wars. Saturn will stand in presence as a guardian of the status quo, preserving the wall, but at the same time getting battled. The clashes between Mars and the outer planets are clearly disturbing the harmony of this Libra Season.

By sunset, the Moon is still in Aries, and it is creating more tension as it forms a Conjunction with Mars in Aries. Rapid changes may be coming our way. A new movement is expected and look for them to be quick. Aries is a burning determination. Since the Moon is related to emotions, expect changes to be at least a bit dramatic, in an unforgettable way as all Fire signs tend to be. The Moon-Mars in Aries Conjunction will also make a beautiful Trine to Venus at the last degrees of Leo, which may even bring some excitement to your evening. Maybe a love encounter or just a fun Friday night out where you have the opportunity to meet old and new exciting friends.

As the Moon moves to the last degrees of Aries, it will conjunct Black Moon Lilith and will form a Square to Jupiter, Pluto, and Saturn in the late degrees of Capricorn. This whole planetary tension is reflected in the public arena. It is being highlighted by a Global Pandemic (Pluto + Jupiter), the American Election represented by two elder candidates (Saturn), the death of a United States Supreme Court Legend, Ruth Bader Ginsburg (Jupiter + Pluto), Racist Protests (Saturn + Pluto + Jupiter), Police Violence (Mars in Aries), Crises in the United States Postal Institution just before the election, and the Spread of Conspiracy Theories (North Node in Gemini, South Node in Sagittarius, both Squared by Neptune).

Neptune at 18° Pisces is aspecting Jupiter at 18° Capricorn forming a supporting aspect between these two very idealistic slow-moving giants. This is also a perfect aspect to ask for miracles through the power of prayer. They are both empowered by faith.

The Taurus Moon forms an early morning Opposition to Mercury in Scorpio. This aspect may be forcing you to do some extra intellectual work that may require long focused hours. This aspect reflects an ambitious drive that may bring some appropriate compensation. The current challenge is worth your effort.

The Moon is also forming her monthly Conjunction with Uranus in Taurus. Most Taureans have a conservative nature, but under this conjunction, Uranus will be lending Taurus his visionaire geniality, while the Moon in Taurus will lend Uranus a more realistic outlook.

We start a new work week with a productive Trine between the Moon in Taurus and Jupiter, Pluto, and Saturn in Capricorn. The Earth element is all about building stability. It is not time to rush things. Patience is needed to get to where you want to be. Keep that in mind as Mercury in Scorpio is about to oppose Uranus in Taurus, tomorrow.

As the Moon enters Gemini, she applies a Square to Venus at 4° Virgo. Virgo is a very conscientious and highly intelligent sign, but even it can get distracted when confronted by the Gemini Moon’s multitasking energy. You might just need to deal with some imprecise information that needs some sorting out, or maybe you will have to analyze and organize an exchange of ideas and communication.

This aspect is not a patient one. Virgo and Gemini are both ruled by Mercury, but they are forever in a Square in the sky. The analytical Virgo Mercury clashes with the curious Gemini Mercury who likes to change subjects and interests without feeling guilty.

Wednesday is a challenging day as Mercury in Scorpio makes an exact Opposition to Uranus in stubborn Taurus. This opposition tends to bring a note of unpredictability to your day. The fixed signs, Taurus, Leo, Scorpio, and Aquarius, tend to hold on to their behavior patterns, which will be tested and challenged under such opposition.

My experience tells me that the more we evolve, the less the impact of challenging transits affects us in a disruptive way, even if the event itself tends to bring a bit of havoc so that we may deal with something that needs review and maybe even need radical change. Mercury has been supported by a lovely Sextile from Venus in Virgo for the last few days. Virgo and Scorpio are both task-oriented, and they are both working on getting things accomplished on an everyday basis.

The Moon in Gemini catches up with the Gemini North Node of the Moon, AKA “The Head of the Dragon.” Taking into account that Mercury is engaged in exact opposition to Uranus. This means that something intellectually interesting may bring an unexpected opportunity to expand your mind and boundaries.

I encourage you to stay tuned in our weekly Moon Planners. I suggest that you develop the habit of taking notes on your astrological journal. This is how we learn and grow with Astrology!