Will you look at that chart! Holy Moses! You can see it is ALL going on!  Not only is this first quarter Moon square the Sun, but also square Pluto (to the same degree), creating what we call in astrology a T-square. Further compounding the energies is the Yod, or Finger of God, being first created by Venus inconjunct Neptune/Pluto, and then Mars doing the same through the middle of next week. Throw in a Mercury square Chiron and a few other choice aspects, and you have a recipe for disaster.

What is so crucial for us to understand through these times of initiation is that evolution is not a long, slow, measured experience. Often the greatest leaps of consciousness occur through cataclysmic catastrophes, which function as catalysts—suddenly expanding our awareness of Self and the underlying mechanisms governing Life.

At this point in time and space, we are leaving the linear, straight-line ascension process and being catapulted to the beyond. Through these freakish events and chaotic occurrences, our will, power, and fundamental survival instincts are tested, sharpened, honed, and necessarily strengthened.  It is not for the faint of heart. Our deepest fears and insecurities are rising like lava from the core foundations of our past identities. The means, tools, people, and support systems that have helped us through difficulties in the past are no longer adequate to meet the present and future demands. If we are to survive and thrive, it is incumbent upon us to develop new capacities, tools, awareness, understanding, and compassion for ourselves, each other, and the world at large. How this is accomplished is the looming question of this time period.

It will be achieved (or not) in different ways by different people and different methods, but I can assure you that astrology is one of those means. 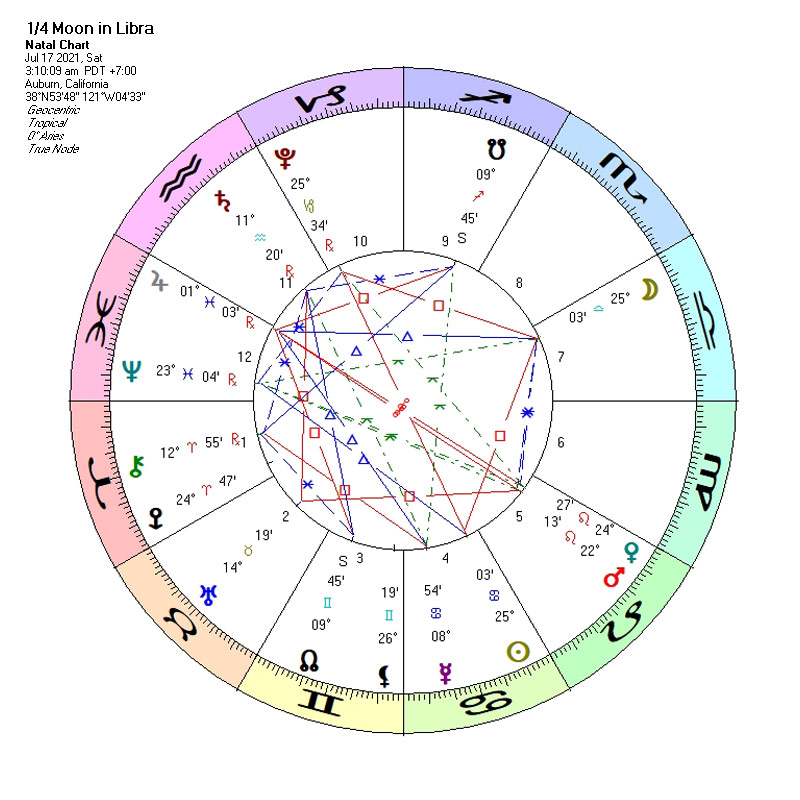 Astrology actively demonstrates the cyclical nature of all evolutionary growth and unfoldment and the interconnection of all life processes and elements within the space-time continuum.

This constant revealing of the Law of One is so beautifully demonstrated in the Sabian Symbols that I can’t help but refer to them again and again. In this case, I will draw upon the midpoint between Neptune (infinite, divine love) and Pluto (the force of evolution), the 25th degree of Aquarius (enlightened collective consciousness). I do so because both Venus and Mars are transiting in opposition to this degree, creating the planetary pattern often referred to as the “Finger of God” or “Finger of Fate.”

Metaphorically, let us see this configuration as a slingshot, with Venus/Mars (both the feminine and masculine energies) being stretched and pulled almost to the breaking point between Neptune and Pluto, symbolizing a crisis requiring major adjustment and shifts in consciousness (thoughts, words, and deeds) to mitigate.

If the imaginary hand pulling back Venus and Mars were to let go, they would soar at the speed of light through the vast reaches of space now occupied by the fixed stars (spirits) gathered around the 25th degree of the sign of Aquarius (approximately 0 degrees of the constellation of the Water-bearer). The psychic Elsie Wheeler saw this image as relating to that degree, and Dane Rudhyar gives a brief explanation of it as follows:

“A Butterfly with the right wing more perfectly formed.

KEYNOTE: The capacity to develop the rational and fully conscious aspect of the mind ahead of normal evolution.

What seems implied is a kind of mutation and, more specifically, the unique development of whatever is symbolized by the “right side” of the organism. Here, however, the spiritual body (the butterfly) is what the image represents. An intense process of conscious individualization is suggested, perhaps at the expense of the instinctual-emotional aspect of the personality (it’s “left side”).

This last symbol fittingly concludes this sixty-fifth sequence… The five-fold set deals with the management of human energies at the emotional level; here management means overcoming – this, on the basis of negative or ego challenging experiences. This fifth symbol refers thus to the results of a TRANSFORMATION OF EMOTIONAL ENERGIES.”

I leave you with this image to meditate upon, allowing the concepts to permeate your consciousness and lift your spirit.

The more we commit to a spiritual practice strengthening the “right side,” or the intuitive aspect of consciousness, thus raising the frequency of our emotional bodies such that we are not driven, possessed, or at the mercy of our base emotional fears, the greater the possibility of developing ourselves (hopefully as a species!) “ahead of normal evolution.”

Blessings on your journey!

☾
So Much Love
Kaypacha