Mind over matter is the name of the game,
I’m now playing on planet earth.
For nothing will stop the new spirit in me,
That’s prepared and ready to birth.

In the midst of complications,
I will not forget,
That the point of life and living,
Is to love and reconnect. 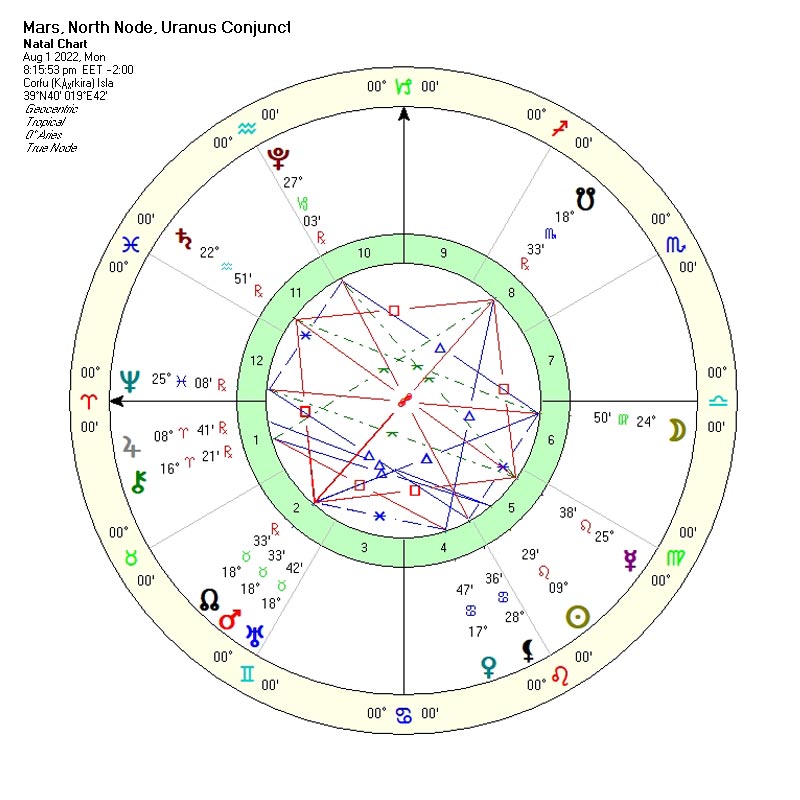 How about this Sabian symbol for the 9th Degree of Aries where Jupiter, the principle of expanding consciousness, is stationing from July 8 to August 18!

“A Crystal Gazer.”
KEYNOTE: “The development of an inner realization of organic wholeness.

The crystal sphere symbolizes wholeness. Within the sphere images take form. These images may reveal future events, but more significantly, they picture “the situation as a whole.” — the situation that the clairvoyant is meant to interpret. The nascent mental faculties, operating through still dominant emotions (or collective cultural incentives), act as a centralizing and whole-making power.”

I find it uncanny that this symbol appears for the duration of the Mars/Uranus/North node conjunction in Taurus, as it can also refer to an internal process wherein each of us realizes our inner wholeness out of which we can creatively manifest new forms. These creative new forms are also symbolized by the Sun and Mercury transiting Leo and can pertain to recreating ourselves anew as better versions of ourselves. The time is now to shed our fears of rejection, ridicule, or judgment and experiment with some wild and crazy new ideas, expressions, relationships, businesses, you name it!

I’m fortunate to go from one amazing place with amazing people to another for astrological exploration of the soul! Meeting so many diverse personalities, I cannot help but notice that every one of us has kinks, quirks, and eccentricities. I especially appreciate those who authentically represent their total outrageous self, even if it gets a little crazy now and then!!. So let your hair hang down and “let it all hang out.” You won’t regret the calm harmony that results from the outside mirroring the inside. Enjoy!

Mind over matter is the name of the game,
I’m now playing on planet earth.
For nothing will stop the new spirit in me,
That’s prepared and ready to birth.

The second important focus of attention is our health.

Get on your mark, get set, GO! Radical self-reliance, baby! These are the days to experience this both without (in the world at large) and within (radical, authentic self-expression). This is a time period where the future comes crashing into the present, destabilizing rigid old forms to make way for more enlightened means of opening new channels to experience ourselves more fully.

This week can be likened to opening a bottle of champagne that has been corked and held in its bubbly elixir, now to be shot up and out for all to see and partake! We’ll probably see events and changes in the people we know and the public at large that will raise our eyebrows and drop our jaws. Best to go with the flow and raise some eyebrows yourself rather than digging and resisting change.

As mentioned last week, there will be plenty of rules, laws, and socially imposed limitations opposing the champagne party. This is symbolized by Mercury squaring the Mars/Uranus/node conjunction and then opposing Saturn. The more you have been holding yourself back out of fear, shame, or guilt, the more frustration, fear, and challenging this time will be. In some ways, we are being called to push our limits, let go of old ideas about “this is the way it is supposed to be,” and experiment with the unknown and unfamiliar. Best of luck in all you do!

Many songs come to mind that reflect this time of sudden, unpredictable change. I mentioned, of course, the Mind Games by the Beatles (which is already on the Spotify Pele Report Playlist!), but I will add “Really Don’t Mind” by Jethro Tull of the “Thick as a Brick” album. That whole album could be worth a good listen!

PS:  💌  Sign up for my newsletter to get this in your inbox every week.

🐋  Deep dive into Astrology and join me somewhere in Europe this summer!! Get tickets here.

💙 My new Book + Calendar is out! WHAT IS LOVE? Check it out!
💞 Check out our Gift Store to spread the word!
🎵 Follow my Pele Soundtrack playlist on Spotify!